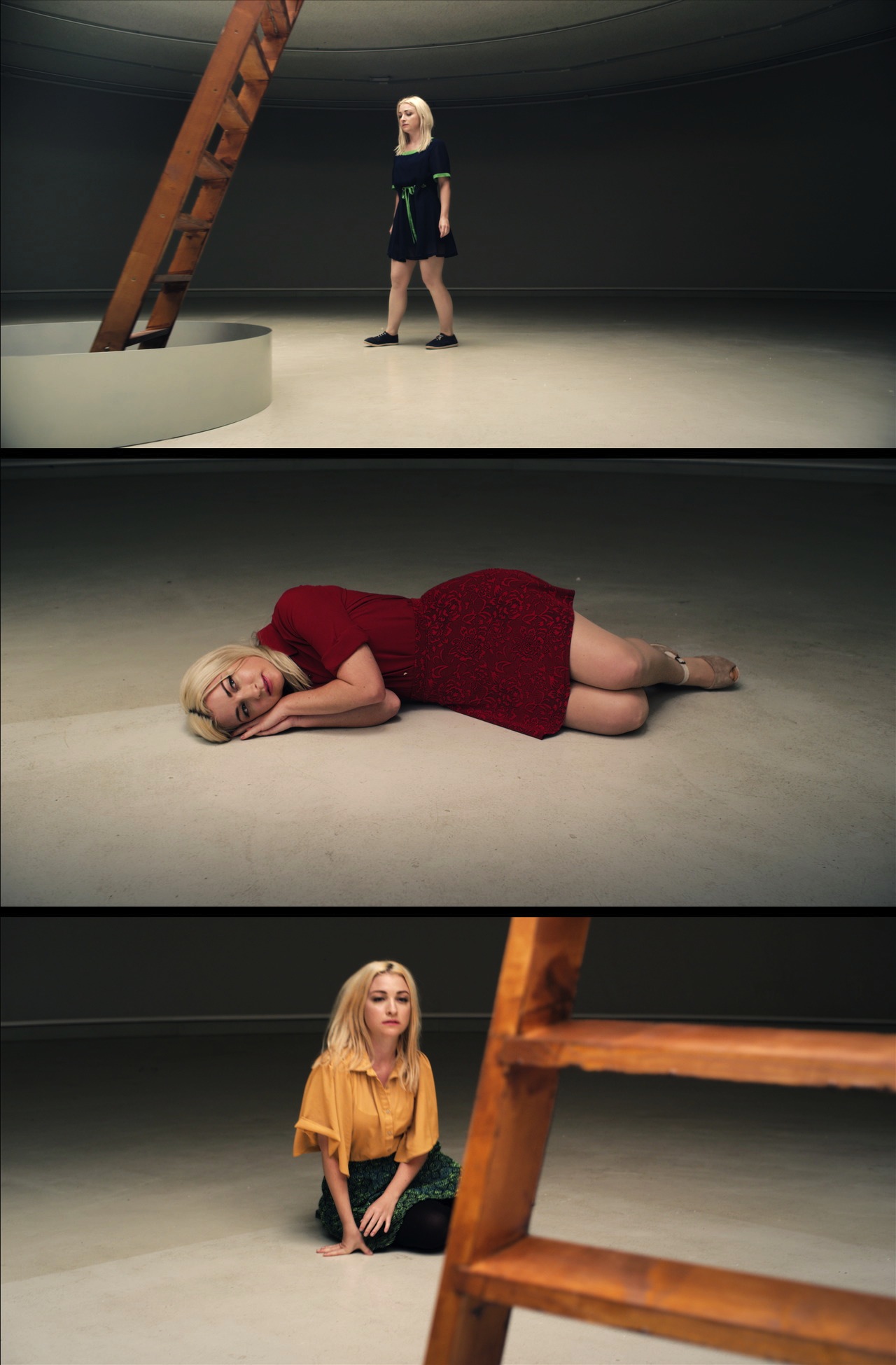 To choose a film layer
click on these circles,
or use the arrow up and down keys
on your keyboard.

And very special thanks to Kate Miller-Heidke.

With The Book of Sand composer Michel van der Aa has invented a completely new genre: the digital, interactive song cycle. Created in partnership with the Holland Festival, Sydney Festival, Google Cultural Institute, BBC The Space and other partners, and created exclusively in digital format, The Book of Sand was launched on 31st May as a website and smartphone app.

With The Book of Sand composer Michel van der Aa has invented a completely new genre: the digital, interactive song cycle. Created in partnership with Sydney Festival, the Holland Festival,  Google Cultural Institute, BBC The Space and other partners, and created exclusively in digital format, The Book of Sand was launched in Australia on 21 October 2015 as a website and smartphone app.

Inspired by the allusions to infinity and the use of mazes and mirrors in the fantastical stories of Jorge Luis Borges, Van der Aa puts you in a space where all places in the world exist simultaneously. A young woman (played by the Australian singer-songwriter Kate Miller-Heidke) collects up sand which is being moved between the film layers by a mysterious machine. Three parallel film layers reveal alternative points of view and introduce new elements to the story, which allows you to choose a new route through the narrative at any point.

The Book of Sand takes its title from a short story by Jorge Luis Borges, and is based on this and four other Borges stories, The Zahir, The Aleph, The Library of Babel, and The House of Asterion. In Borges’ story, the Book of Sand is a book with infinite pages, with no beginning and no end, that becomes an obsession and gradually consumes its owner. The other stories all deal in similar Borgesian visions of the infinite – a point that contains all other points in the universe, an object that holds the attention so much that it becomes all of reality itself, a library of all possible books, the Minotaur in an infinite labyrinth.

Mirrors and self-replication are common themes in Van der Aa’s work, from his first opera One to the cello concerto Up-close, so the stories of Borges are an ideal match. Borges is often described as having foretold the Internet, and Van der Aa uses online technology to explore his ideas in ways the writer could not have foreseen, incorporating three audiovisual layers of film and music, which the user can jump between as they wish. Each layer is based around the same vocal line, but the accompaniment and the film are different for each, meaning that users can create their own paths.

The first layer is intimate and abstract; the second builds on Van der Aa’s previous forays into pop-electronica in Sunken Garden and Hysteresis; and the third features 12-voice a-cappella choir. Each layer of film shows a different perspective on the story, introducing different alter egos of the central female protagonist.

This project is part of Sydney Festival 2016. Explore the full program at sydneyfestival.org.au

The nine words in italics are added by the composer.

It is true that I never leave my house,
but it is also true that its doors
whose numbers are infinite
are open day and night.

Like the ram about to charge,
I run through the stone galleries until I fall dizzy to the floor.
I crouch in the shadow of a pool or around a corner
and pretend I am being followed.

Everything is repeated many times, fourteen times,
but two things only once:
above, the intricate sun; below Asterion.

Now we shall come out into another courtyard.
You'll see a pool filled with sand,
the temple of the Axes and the sea.

Bounded in a nutshell,
queen of infinite space.
Where all places are
seen from every angle.

Focus your eyes on the nineteenth step.
A certain ocular adjustment will be necessary.

Where all places are
each standing clear, without confusion or blending.
All sources of light,
All stars, all lamps, are in it, too.
Lie flat on your back,
and focus your eyes on the nineteenth step.
Total darkness, total immobility.

I saw the teeming sea;
a silvery cobweb in the center of a black pyramid;
the circular ruins.
I saw all the mirrors on earth and none of them reflected me;
a woman in Inverness whom I shall never forget;
her tangled hair, I saw the cancer in her breast;

Focus on the nineteenth step

I saw a Persian astrolabe;
the circulation of my own dark blood;
I saw bunches of grapes, snow, tobacco, lodes of metal, steam;
I saw the survivors of a battle sending out picture postcards;
a ring of baked mud in a sidewalk, where before there had been a tree;
tigers, pistons, my empty bedroom;
convex equatorial deserts, tides;
I saw the coupling of love and the modification of death;
I saw your face; and I felt dizzy and wept.

I dreamed that I was the pile of coins guarded by a gryphon.
A four-faced angel who at one and the same time
moves east and west, north and south.
The Combed Thunderclap
A small iridescent sphere of almost unbearable brilliance.

A vein in the marble of one of the twelve hundred pillars.
I saw a splintered labyrinth;
Water of the sword,
In the heart of a stone,
Unforeseeable time.

I saw the Aleph from every point and angle,
I felt infinite wonder, infinite pity.
A panoply of all possible futures.
The unimaginable universe.

This website is built in HTML5 and works best in Google Chrome. Most residential cable and DSL connections should be more than adequate to playback this interactive video. In order to smoothly playback at HD quality you need at least a 20 Mbit/s download connection and a relatively current computer.

If you experience choppy video or audio playback:

Please download our dedicated App from the AppStore (free)

iOS for iPhone and iPad

Please use the mobile Google Chrome browser for the best experience.

If you are having any further technical issues, please email bookofsand@sydneyfestival.org.au